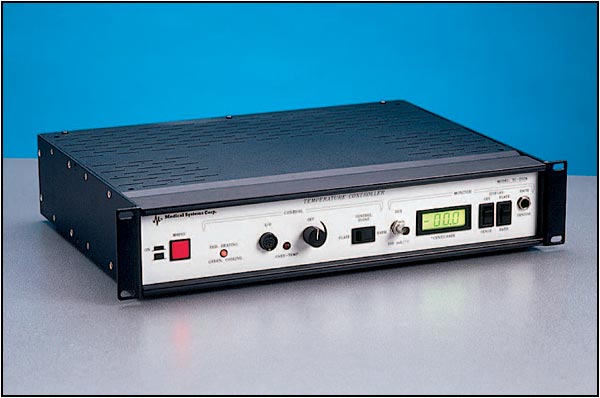 While the unit has many potential uses, it has been designed as an ideal companion unit for the Harvard Apparatus/Medical Systems Peltier-based micro-incubators. Because the TC-202A is bipolar, it is ideally suited for use with Peltier devices such as the models PDMI-2 Open Perfusion Micro-Incubator, PSMI Patch Slice Micro-Incubator and CSMI Chambered Slide Micro-Incubator.

The TC-202A allows the researcher to control the command temperature from alternative locations. In the case of the PDMI-2, PSMI and CSMI micro-incubators, temperature is controlled either from a thermistor placed in the bath, or from a second thermistor permanently positioned on the plate containing the regulated surface of the Peltier devices.

Accurate temperature control (±0.2°C) is achieved by sensing temperature with a miniature thermistor, digitizing the thermistor signals, and then proportionally regulating a low noise DC current output. Current output is also regulated to match the thermal time constants of small systems, such as micro-incubators, thus minimizing initial set-up overshoot and oscillations about the set point.

For the most up-to-date information on Warner Instruments news and technologies, sign-up for our newsletter.