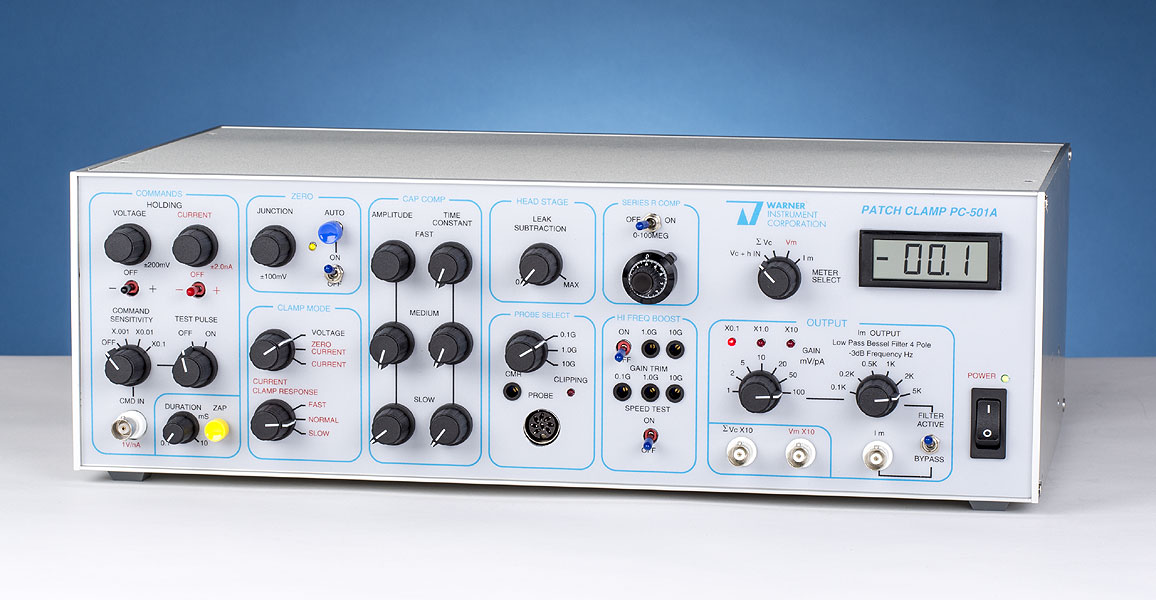 A workhorse patch clamp amplifier equally at home in research and teaching labs.

The PC-501A Patch Clamp is a workhorse, equally at home in research and teaching labs. Both single channel measurements and whole cell studies are easily handled with this modestly priced instrument.

V Clamp Mode:
Input is clamped to a maximum of ±1 volt. Commands are the sum of the holding voltage and any external input signals.
Zero Current Mode:
Bridges the voltage and current clamp modes. All commands are inactive except the junction zero, which functions in this case as an offset control for the electrode and tip potentials associated with the pipette.
I Clamp Mode:
In the current clamp mode, active commands are the current hold and any external command input signals, summed. Clamp stability is enhanced with the selection of three clamp speeds.

Voltage Offsets (including junction potentials)
Automatically compensated with the auto zero or manually with the junction zero.
Capacity Compensation
Paired controls; fast (0-5 µsec), medium (0-2 msec) and slow (0-20 msec) compensate the current transient caused by a step command signal. Each pair has a separate control for amplitude and time constant.
Series Resistance
Signal errors contributed by the electrode (access) resistance in whole cell recording are subtracted from the output with the series R comp control. The compensated resistance (0-100 MΩ) is read from a ten turn dial.
Leak Subtract
Used to compensate leakage current due to the voltage drop across the seal (shunt) resistance.

The membrane current signal Im is bandwidth limited by a 4-pole Bessel filter with six frequency cut-offs and can be bypassed to obtain the full 10 kHz bandwidth. Gain is selected with a 7 position switch and scaled to the headstage resistor.

Additional outputs are Vm x 10 (membrane voltage at x10 gain) active in current clamp mode and Vc x 10, the sum of all commands at x10 gain. Rear panel outputs include; gain telegraph, a DC signal which communicates to a data acquisition system the Im output gain level and the headstage in use, and sync output, a signal to synchronize an oscilloscope or computer with one of the internal test signals.

Simple modifications to the PC-501A make it suitable for voltammetric measurements. They include increasing the holding voltage potential to ±1 volt and the external voltage signal level to ±2 volts maximum. Internal switches can be installed to allow switching between normal (patch) and voltammetry operation.